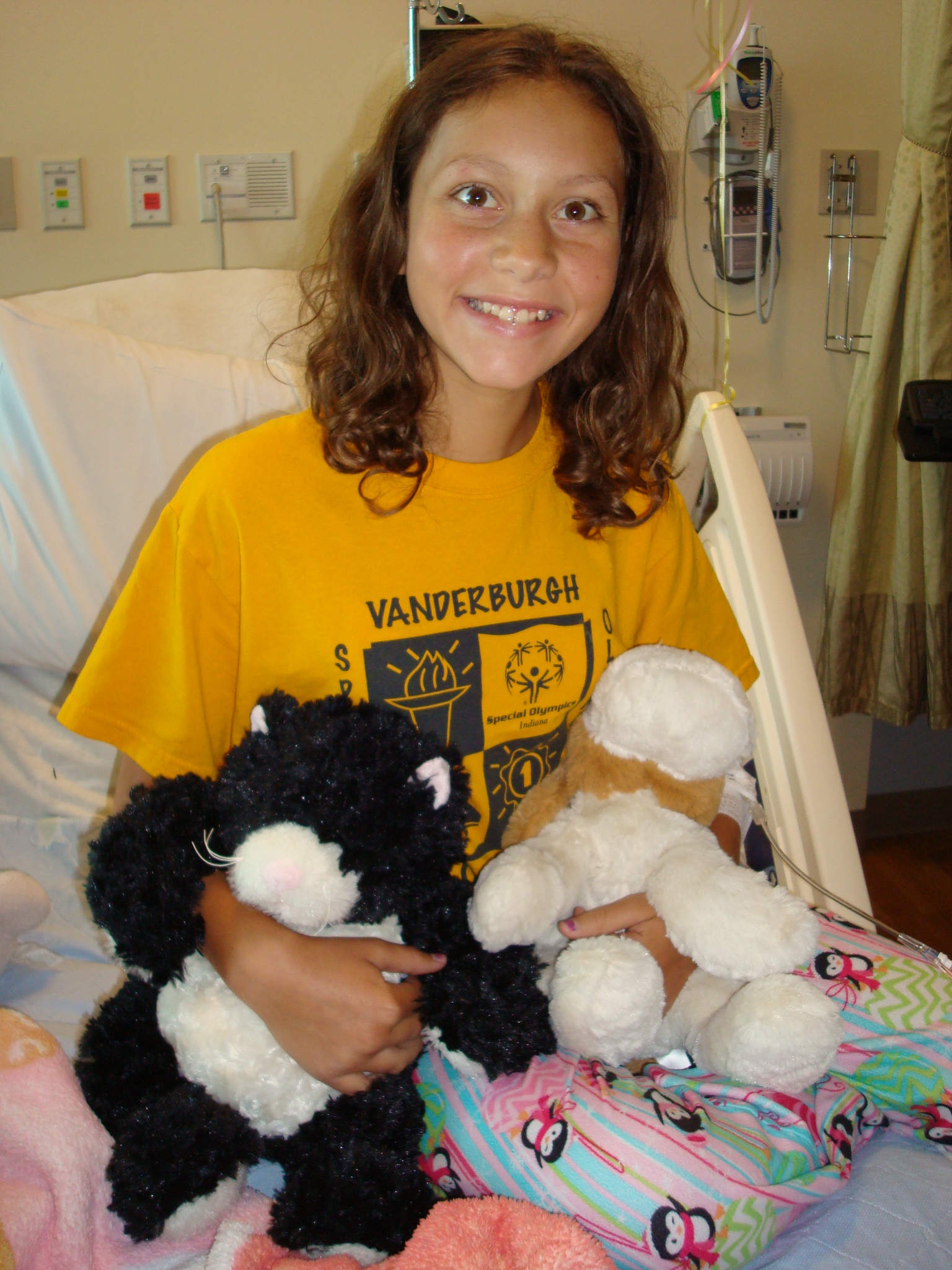 Morgan’s “heart journey” started in the spring of 2010 as a 4th grader at the age of 11.  She started getting sick and throwing up pretty frequently for no apparent reason.  She had always been a very healthy child – rarely missing school – so this was a mystery.  Throwing up continued into the summer and early fall – happening more and more often and even requiring a short hospital stay for testing.  In addition to her local pediatrician, we pulled Gastro-Intestinal doctors from Riley Children’s Hospital into the mix, but after a battery of tests, scans, ultrasounds, etc., we still had no answers.

Finally, in late September of 2010, we took her to the ER at Riley Hospital.  Within a few hours of admittance, we found she was in heart failure with an ejection fraction (measures heart activity) of 16%.  Normal is 60%!  Her diagnosis was “Dilated Cardiomyopathy” – a condition that isn’t reversible but can be treated with medication, at least temporarily.  We left Riley 10 days later with a more stable daughter, about 13 lbs of fluid removed from her lungs, and 6 new daily medications that would protect her heart for the time being.

Over the next 3 years, Morgan had regular check-ups, ECHOs, EKGs, and sometimes wore a 24-hour heart monitor – all to monitor her heart function and ensure she was maintaining a safe ejection fraction ratio.  We were told about a year or so into this “new normal” that we should research heart transplantation to prepare ourselves.  Likely it was not a matter of “if”, but rather “when” she would need one.

Fast forward to 2013.   Although Morgan had periods of not feeling well – which always sent up a red flag that her heart was failing again – the incidents became much more frequent by spring of 2013.  ECHOs showed decent heart function, so we pulled GI doctors from Riley into the mix again, along with a Geneticist who thought she might also have a muscle disease.  We started over with all the tests and scans and so on.  Yet there was no indication of what the issue might be.  We were told her heart function was the best it had been since before her diagnosis.  We were frustrated and worried about Morgan’s continued decline.  The doctors were not working with one another as a team.  Finally, we decided it was time to look elsewhere for care and were referred to Cincinnati Children’s Hospital on a Friday.  Once that ball was rolling, it was like a boulder rolling down a mountain.  I reached CCH Cardiology on Tuesday morning after a holiday weekend and managed to get her added to their clinical list the following day.  We packed our bags, just in case we had to stay a few days for tests, and drove the 4 hours to Cincinnati.  That was September 4.  We didn’t come back to Evansville until just before Christmas!

When Morgan saw the doctors at CCH, she was in heart failure again and was admitted to the hospital immediately.  We discussed treatment options over the next several days, but there was no question that, should we want to go that route, she needed to get onto the heart transplant list asap.  First, she needed to go through the proper testing to determine whether or not she was a candidate.  Waiting for a heart could take months, and she didn’t have months, she had weeks at best and we needed to determine how to treat her in the meantime.  We finally opted to have a “Ventricular Assist Device” (VAD) placed in her chest to do the work of her heart while she waited for a heart.  Part of the VAD pump was placed inside the heart and part sat in the chest cavity outside the heart.  An electrical wire then comes out the abdomen to be hooked to an external power source.  This is considered a “bridge” to transplantation, although some patients who are not candidates for transplant can live with the VAD as their final solution.  Morgan had the VAD for only a week before a heart became available!  The doctors had told us that her wait might be a little shorter due to her size and blood type.  Still, we expected to wait 1-3 months.  However, on the morning of September 25, 2013, only 5 days after she got the VAD and less than a week after being on the transplant list, Morgan went to surgery again to get a new heart.

In the weeks and months that followed, we saw so many doctors and various specialists at CCH.  It’s funny how one organ affects the others – if one gets out of whack, there’s a domino effect.  She had issues with her kidneys and required dialysis, she had extremely high blood pressure and started having seizures, getting Neurology involved.  She developed steroid-induced diabetes and had to take insulin.  There was so much more, but in a nutshell, we were seeing new doctors every week, trying to get her back to a new normal.  She was finally released to the Ronald McDonald House just before Thanksgiving.  We remained in Cincinnati, seeing doctors and therapists daily, for the next month.  We returned home just before Christmas.

Morgan’s new normal included 18 daily medications (60 pills a day), plus blood sugar checks 4 times a day and insulin.  We went back to CCH for clinicals and heart biopsies at least twice a month for the first several months.  Gradually the trips became once a month and then every other month.  Morgan had to wear a mask at school and in public for a couple of months.  If anything were the least bit out of the new normal, I would be on the phone with the doctors.  We always acted on the side of caution.

At 4 ½ years out, things are a little more laid back.  We go to CCH at least once a quarter.  Biopsies are very routine as that is the best way to check for rejection.  A body will never stop trying to reject a new heart.  We constantly monitor drug levels via blood tests and adjust her medications as needed, being sure the levels of her anti-rejection meds stay within an acceptable range.  The blood testing also serves to check her kidneys, look for signs of infection, and watch for any other indication that something is off course.  Labs are done at CCH if we are there for an appointment, or in Louisville at the children’s hospital in between CCH appointments.  Once a year, they check the arteries for signs of disease during a biopsy.

A few of the meds were eliminated over time – today she takes only 13 medications (28 pills per day).  We’ve added new doctors and specialties to her list of providers – dermatology (transplant patients are prone to skin cancer), neurology (she began having seizures 3 years post-transplant), Otolaryngology (her tonsils were removed 4 years post-transplant), Infectious Medicine (her infections take more than antibiotics – she’s had multiple hospital stays because of them), nephrology (we watch her blood pressure and kidneys for any signs of decline), and so on.  We keep her family doctor aware of everything that happens at CCH and visa versa, and Morgan continues to work with a therapist to develop coping skills.  Although she rolls with the punches more than any other child I’ve ever known (or adult, for that matter), I know it must be difficult growing up in these extreme circumstances.  I can understand her periods of anger and frustration – whether I like them or not!

We approach everything with caution now – especially during cold and flu season.  She’s less active than a normal teen, although that’s probably more habit than necessity.  She’d become so accustomed to NOT being able to do things that I think she’s nervous to try.  She has a cognitive disability on top of the heart issue and has participated in Special Olympics since she was 9.  It is a great outlet for her physically, without worrying about too much exertion.  She bowls, swims, plays cornhole, dances and cheers.

We have met most of the family and many of the extended family members of her heart donor.  They are all very nice and loving people, and we keep in touch.  We are all so blessed that they made such a selfless decision at the most challenging time of their lives.  We’ve been touched and blessed by so many people along the way – both friends and strangers.  We’ve had the best care at CCH, time and time again.  Morgan was granted a “wish” by the Make-a-Wish foundation – we went to Disney 1 year after her transplant.

In summary, the path we found ourselves on with Morgan is not one I would wish on anyone, but it has been a path full of blessings.  It has taught us many lessons about patience, thankfulness, kindness, joyfulness and faith.  Life is not to be taken for granted.  Every life has purpose and every struggle works together for something wonderful.  God is good!